Due to the risk from Typhoon Hagibis Rugby World Cup organizers decided to canceled Saturdays matches between New Zealand VS Italy and France VS England, whereas Sunday matches between Scotland and Japan is not decided yet.

On Thursday, the World Rugby, the sports governing body and tournament officials announced at a press conference that the decision had been dropped because of the interruption to be expected from the typhoon, mostly transport systems.

In recent years one of the most violent tropical storms predicted to hit the Tokyo region this weekend.
France and England have already qualified for the RWC quarterfinals 2019, however, Italy eliminate from the RWC 2019 tournament and they were angered on this cancellation decision. A victory against New Zealand in Toyota could have got through the Italians. Now All Blacks and South Africa top of the list of RWC 2019 group.

Scotland and Japan still need more points to qualify for the quarterfinal RWC 2019 if the match will cancel then it will affect the last placings. The decision will take on the game day.
Competition standards declared that any pool match that can't be played will not reschedule and rather is recorded as a 0-0 draw, and will give two points to every team without extra points.

In the other hand Japan is the host nation and if the match cancelled the Japan will get the chance to play in the quarterfinal. 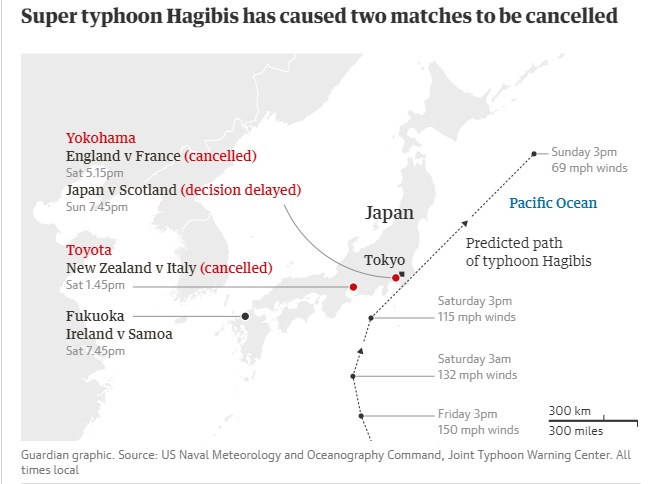